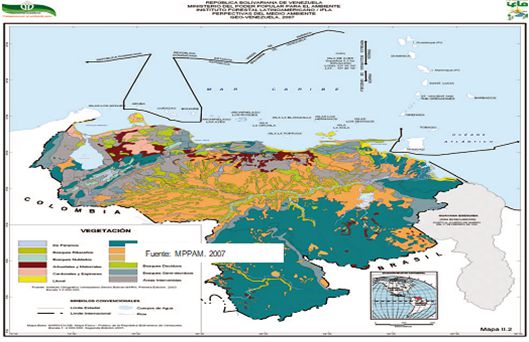 The location of the Bolivarian Republic of Venezuela in the tropical region of northern South America, in the Northern Hemisphere, with a total area of 91.64 million ha, of which 49.6 million correspond to natural forests (54.12 % of the national territory). Venezuela shows a series of geographic advantages that allow a rapid growth and development of the trees in comparison with the temperate zones where the growth is extremely slow. However, the occurrence of deforestation processes has intensified in a sustained way in the recent history of the country.
In the period from 1920 to 2008, the loss of 26.43% of the forested area has been recorded. Likewise, in the period 1975-1988, deforestation was estimated at 216,000 ha year-1, equivalent to 2.9 million ha in 13 years (Catalan 1992). Deforestation has now increased to worrying levels and according to FAO estimates (2010), in Venezuela, a forested area of more than 288.000 ha year-1 is deforested.
In the middle of the 20th century several public and private institutions began an important effort to reforest areas of sandy soils of scarce depth on a bed of highly impermeable clay. With erosion processes generated as a result of strong winds that causes severe damage to the little existing vegetation. It was expected that with the passage of time this region could become a desert in the oriental plains of Venezuela. This is how the Maderas del Orinoco Companies (CVG - PROFORCA), the Venezuelan Corporation of Guayana (CVG), Smurfit Kappa Cartón of Venezuela, San Carlos Forestry Development, Masisa. Propulso, among others, started in different regions of the country the establishment of plantations for various purposes. For this they have used fast growing forest species such as: Pinus caribaea var hondurensis, Eucalyptus Urophylla, Acacia magnium, Caraipa llanorum, Tectonia grandis, Hebea brasiliens, Gmelina arborea, Erisma uncinatum, among others. At present, a reforested area of 650.000 ha has been reached. This has favored the protection of natural habitats by reducing the pressure for exploitation and use of the forests.
The legal framework established in the new National Constitution, approved in 1998, is based on decrees of 1825-1829 of the Liberator Simón Bolívar and classifies the territory in diverse forest areas establishing a modern environmental conservation policy. A historical summary and the current legislation with the classification that promises a rational management of the national territory is presented.