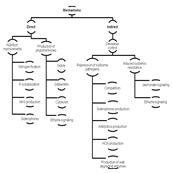 Surface mining causes major destruction of natural landscapes and ecosystems. The most fertile, surface soil layer is lost permanently, together with vegetation, wildlife, and micro flora. Post-mining areas are characterized with diverse edaphic, topographic, hydrographic conditions, which complicate land restoration. Successful establishment of forest ecosystems on such land depends mostly on selection of tree species. The chosen plants must be capable of tolerating a wide range of acidity, fertility, moisture, and have potential to ameliorate such substrates for more demanding species. But, reforestation of heavily damaged ecosystems, such as post-mining areas, demands a new approach in seedlings production. This new approach takes into account specific requirements of habitat and integrates them into â€œtargeted production of planting materialâ€. A good strategy for successful reforestation of post-mining areas is the input of organic matter (compost, mulch). Also, current knowledge and experiences emphasize the potential of beneficial microorganisms such as, mycorrhizal fungi (MF) and plant growth promoting rhizobacteria (PGPR). The majority of studies that deal with beneficial interactions between trees and microorganisms are focused on the mycorrhiza, while plant growth promoting rhizobacteria are less present in silviculture. In this study, the focus is on the reforestation challenges of two mining basins, Majdanpek and Kolubara and suggests beneficial microorganisms as potential solution. The study presents results of several yearsâ€™ researches on plant response to the presence of mycorrhizal fungi and PGPR. The substrates used for plant growth were Majdanpek and Kolubara mine deposals. Mycorrhizal seedlings were grown in Majdanpek mine deposal, and at the end of the experiment they had 30% higher biomass in comparison to control (seedlings without mycorrhiza). Seedlings linked with fungi had a higher survival rate. Deposals from Kolubara Mining Basin were used as a substrate for seedlings inoculated with PGPR. In the first experiment, Scots pine and Norway spruce were inoculated with Azotobacter chroococcum, Bacillus megaterium, B. circulans, B. licheniformis, B. pumilus, B. amyloliquefaciens. Inoculation resulted with higher biomass production (Scots pine 43%, Norway spruce 34%). Similar results were obtained in the second experiment where Scots pine and black locust were inoculated with Bacillus licheniformis, Aeromonas hydrophila, Pseudomonas putida and Burkholderia cepacia. Both species had higher biomass (around 20%) in comparison to un-inoculated control. The results confirmed the fact that early establishment and successful growth of vegetation on devastated areas depends on the presence and activity of soil microbes. Microorganisms as a â€œnatureâ€™s solutionâ€ pose the potential to alleviate reforestation challenges of anthropogenic devastated landscapes. Their presence and activity is crucial for ecosystem stability. In areas with compromised balance, their introduction is justified action for achieving the goal of long term ecosystem sustainability.