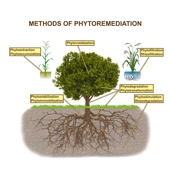 The concern for environmental protection has existed since the time of first human civilization. As society develops, the chain of changes during the natural flow of processes in ecosystems has been supplemented by a new link - pollutants. They have an effect on all other members of the ecosystem (changes may be visible immediately or harder to spot), which leads to an extremely complex relationship with nature. The values of some parameters of pollutants reached an alarmingly high level. The tendency to reduce the risk of air, soil, water, plant, and animal pollution to a tolerable limit, which would salvage the environment and most importantly human health, became a global problem. Heavy metals as pollutants have been an interest of researchers for their conduct, especially in forest ecosystems, which has been expressed in the previous year's more than ever. With its numerous toxic effects, heavy metals are endangering the existence of plant species that live in already contaminated environments. This is all an argument regarding the fight of modern society that the emission of polluted materials gets reduced in order to avoid multiple negative effects, which can endanger the existence of living organisms in general, as an argument for the continuation of numerous researches that are conducted in this area. The monitoring of heavy metals is of significant importance because their toxicity and accumulations are vital for the ecosystem. Polluted soils can be reduced and they can restore their function using physical, chemical, and biological techniques. Physical and chemical methods are very expensive and cause mainly irreversible changes, thus destroying biological variety. The biological recovery of contaminated soil represents an efficient method of reducing health risks for both mankind and the ecosystem.Â  For this purpose, biological indicators are used. Numerous researches have led to improvements of the initial idea about using plants as a remediation of the environment and the removal of different contaminants from contaminated medias into promising technologies of environmental protection under the title "Phytoremediation". This technology consists of the reduction of concentrations of polluted materials in polluted soils, water, or air. Plants have the ability to store, degrade, or eliminate metals, pesticides, solutions, explosives, and crude oils. Its derivatives and various other contaminants form mediums that contain them. This paper especially considers methods of the possibility of the usage and application of plants in restoring soil contaminated by heavy metals as well as other pollutants.

Most read articles by the same author(s)